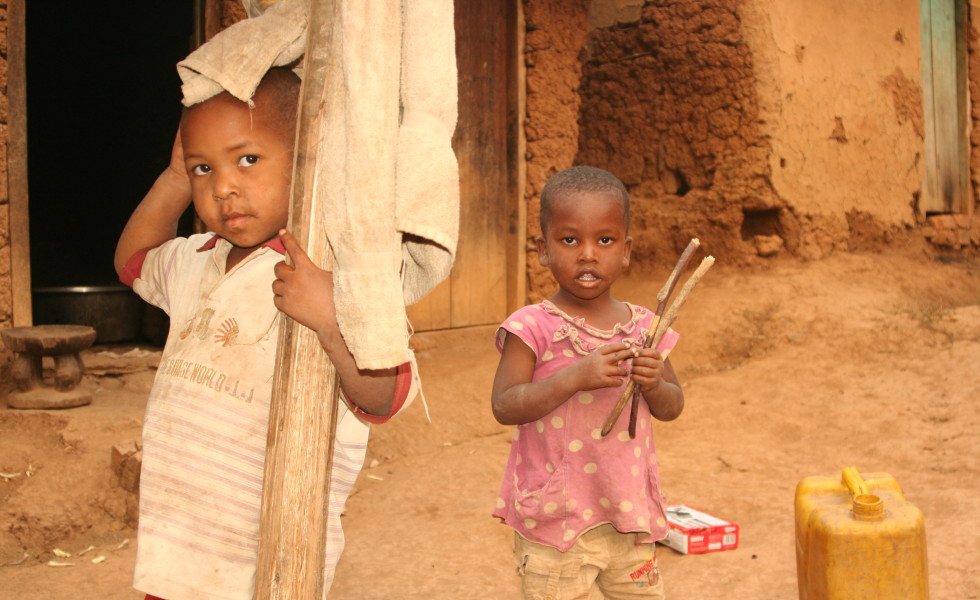 One of the most delightful “jobs” I have as the American liason for Mountain Children’s Ministry is meeting and interviewing the children of the village that our Executive Director, Ivan, has deemed appropriate for sponsorhip. Okay, I confess…THE most delightful job!

Meet Sheila and Tonny, sister and brother, 4 and 2 years old. These two darlings were playing in their Jaaja’s (grandma’s) yard with sticks and dirt when I surprised them rounding the corner of their mud home with Ivan. Yikes!! A WHITE person! Now this is a MOST unusual visitor in the village. Most of the children this young have never seen a white person at all much less in their yard and up close. This makes the looks on their faces much more understandable. White people, especially white people with blue eyes, must look to them the way a green person with red eyes would look to us…alien at best, monster at worst and definately someone to avoid! At least initally. Actually I took this photo after I had been there for awhile…and they were still skeptical.

One intersting thing to note about this photo is that Sheila is NOT the child in the pink shirt. That is Tonny her 2 year old brother. Sheila is the child hiding with her head half covered by a hanging towel. Gender specific clothing color is a luxury that I did not even realize until I started traveling to Africa. When you have nothing you don’t care if you are a boy wearing pink or even patent leather shoes, which I have also seen. Rips, stains, incorrect sizes? These are the norm as you would expect if your child only had one or two outfits. Or ate with their fingers. Or spent all day in the dirt. I say “spent” not “played” because I have seen little ones not 3 years old digging in the garden or fetching water or sticks for fires, and yes I am seriously not exaggerating. Eveyone helps.

Surprisingly, or thankfully I should say, these little ones do warm up to the white “Muzungu” after some coaching from Ivan and their Jaaja, Robinah. We are invited into their little home and served a drink called Obushera I pull out paper, colorful markers, children’s books and WOW, “sweeties” (hard candy) and with a little more time they decide that okay, maybe she is not going to eat us for dinner. Which is to say they will venture nearer and offer shy smiles but any touching is initiated by them in curiousity over the white skin. Once a young boy sat next to me and began to rub my forearm furiously. After several minutes I realized he was trying to wipe the white off me. Certainly there was black skin underneath?

And do you know what? Over the years I have discovered that indeed there is a strong desire for black skin underneath all this white. I can’t help the tears that spring to my eyes as I type that thought. How many times have I wished that I could share that rich mahogany skin and walk among my family in Africa without raising glances and stares and even crowds of children calling after me? How many times have I wanted to scoop the little ones up immediately and swing them around or hug them? How many times have I wondered if I was made for adversity as they are; strong, never complaining, not imagining they are in control, not frustrated with waiting, humble, joyful people who look after one another as a norm not as a favor?

I once heard Wes Stafford speak, the President of Compassion International, one of my heros. He was raised in Africa, the son of missionary parents. He told us every night he would go to bed and pray to God that when he woke up his skin would also be black like all his friends. I’m telling you my very soul resonates with that prayer. To have their character is an even more impossible prayer…an accomplishment doomed to failure without a greater miracle from God. But we serve the God of the impossible so I continue to pray.

The day I write this blog both Tonny and Sheila are still unsponsored. I’m not worried. Our God of the impossible will answer their prayers as well. And their sponsors will be the most blessed, by far.